Yay, another Music Monday! I'm so glad I'm back at some place where I have lots of different materials at hand and can just start creating. :) So here is something I've had in mind for weeks now.

Not long ago I discovered a German song which carries stars in the title. This is how I picture it: 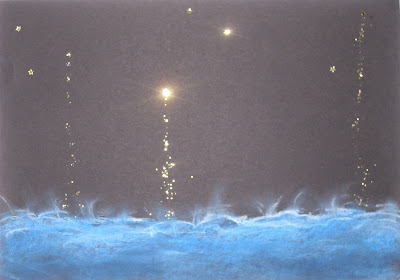 "Am Rande der Welt fällt Gold von den Sternen."
(At the edge of the world there's gold falling from the stars.)

Since it seems to be a rather unknown song, I'm going to give it away:

"Gold von den Sternen" (Gold from the Stars) from the musical "Mozart" - but the music of the song has nothing to with Mozart as far as I can tell...

I used soft pastels for the water, glued little golden stars to the sky and dripped a bit of golden glitter beneath some. The effect of the flash for the photo made it just what I had imagined it should look like! :) 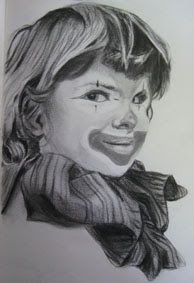