Just in time for the new year I finished making a new calendar for my wall - this time with pictures of stars and their accomplices: 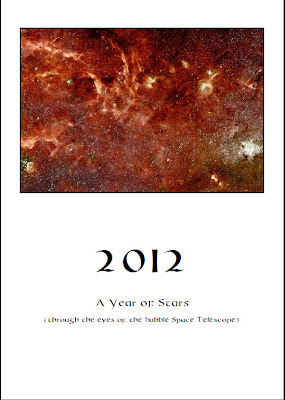 While looking for pictures I discovered something interesting I had not know before: All photographs by the Hubble Space Telescope are 'public domain', meaning you can use them for your own purposes as long as you name the NASA/ESA and STScI as authors. I discovered the Hubble Gallery and found myself in star heaven!

The picture on the calendar's front cover is a Hubble-Spitzer Colour Mosaic of the centre of our galaxy:  "the sharpest infrared picture ever made of the Milky Way's galactic core, where massive stars are forming."

And these are the twelve pictures for each month (all by NASA/ESA/STScI) - prepare for some breathtaking, truly awe-inspiring beauty: 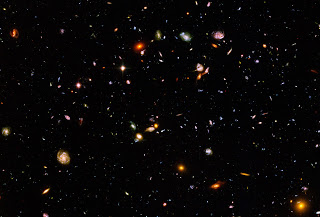 Distant galaxies in the Hubble Ultra-Deep Field photograph, includes galaxies of various ages, sizes, shapes, and colors. The smallest, reddest galaxies, of which there are approximately 10,000, are some of the most distant galaxies to have been imaged by an optical telescope, probably existing shortly after the Big Bang. 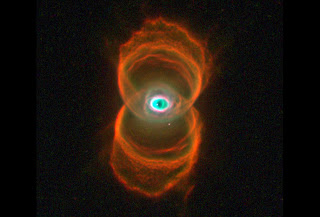 Planetary Nebula MyCn18: An Hourglass Pattern Around a Dying Star. 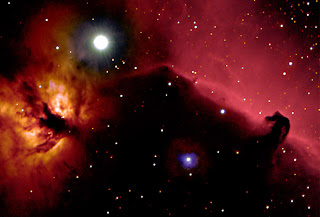 Flame nebula and Horsehead nebula (NGC 2024 and Barnard 33).
The Flame Nebula is an emission nebula, the Horsehead a dark nebula, both in the constellation Orion and about 900 to 1,500 lightyears away. 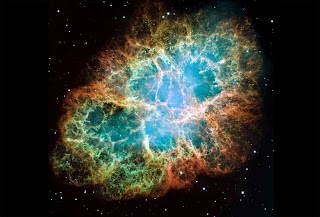 The Crab Nebula - a supernova remnant. The stellar explosion which created it has been observed in 1054 by Chinese and Japanese astronomers. 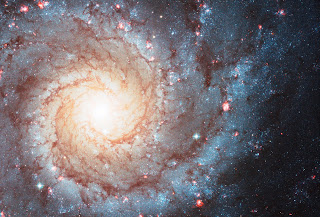 The spiral galaxy M74/NGC 628 is about 32 million lightyears away and slightly smaller than the Milky Way. With its two clearly defined arms (only one visible here) in which there seems to be a rich environment of star formation, it represents an archetypal example of a Grand Design Spiral Galaxy. 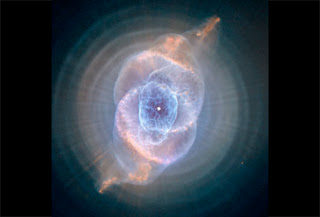 The Cat's Eye Nebula's Intricate Layers. A planetary nebula with a bright and hot (possibly binary) star in its centre. One of the most complex nebula structures currently known. 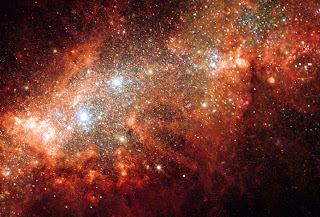 "The nearby dwarf galaxy NGC 1569 is a hotbed of vigorous star birth activity which blows huge bubbles that riddle the main body of the galaxy. The galaxy's "star factories" are also manufacturing brilliant blue star clusters. This galaxy had a sudden onset of star birth about 25 million years ago, which subsided about the time the very earliest human ancestors appeared on Earth." (from nasa.gov) 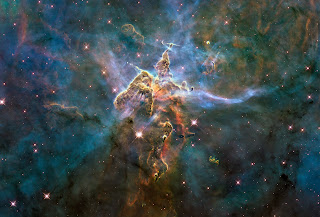 Wide Field Camera 3 shot of the 'mystic mountain' a dust and gas structure in the Carina Nebula. The pillar has a length of three lightyears. At its top cool hydrogen (green) is being worn away by the radiation of nearby stars, while stars within the pillar unleash jets of gas that stream from the peaks.
Blue: oxygen; green: hydrogen and nitrogen; red: sulfur.
HST's 20th anniversary picture. 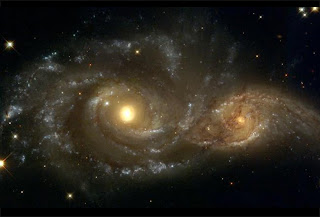 Interacting Spiral Galaxies NGC 2207 and IC 2163. NGC 2207 is tidal stripping the smaller IC 2163 by basically pulling stars from it. They are only at the beginning of their collision process. In about a billion years they may merge and become an elliptical galaxy. 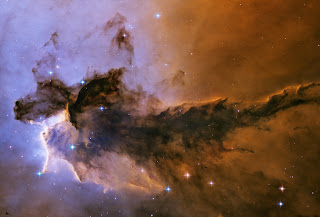 A 'small fraction' (ten lightyears/91.7 trillion km long) of the Eagle Nebula, a giant evaporating shell of gas and dust which has becom a stellar nursery, currently froming anopen cluster of stars. This pillar has been dubbed 'Fairy'. (If you rotate the picture 90° clockwise you may understand where this is coming from.) 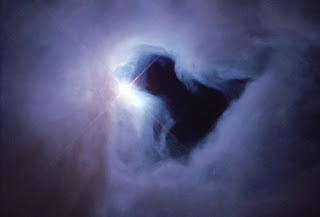 Reflection Nebula NGC 1999. Reflection nebulae do not emit light on their own but shine because of a light source embedded within.. The bright, young star left of the center gives NGC 1999 its brightness. The gas and dust of the nebula is left over from the star's formation. (I really like how this works. :)) 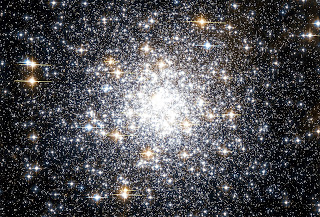 M69/NGC 6637 is a globular starcluster 29700 lightyears away. Indications about its diameter vary between 61 and 85 lightyears.

I know why I was so into this as a teenager - I am again, or still... I simply cannot stop staring at those pictures, and I want to know everything!
I think I don't need to bother about the beauty or non-beauty of the stars I make throughout this project. The greatest beauty is out there and no matter what I do, I'll never even get close. So I can just as well sit back and relax. :)

Posted by Lilalena at 3:17 PM No comments:

Here's a star I'm very fond of. I met some old friends for a night full of music and we had loads of fun. Ever since we all left school we manage about once or twice a year to all be in the same town (or close enough) at the same time and be free the same night to get together and make some music. I arranged some of our instruments in a kind of star shape before everybody left: 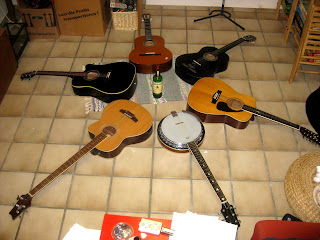 They are all different, by the way: a banjo, an accoustic bass guitar, a steel-string guitar, a classical guitar with a special kind of steel strings, another one with nylon strings, and a twelve-string guitar (plus a bottle of whiskey in the middle - which was not an instrument. Not directly, anyway...)

Thanks for the fun, everyone! ;)

Posted by Lilalena at 1:39 AM No comments:

It's been years since I last made one of our traditional family chocolate cakes. Today, I made one for my sister's birthday - and decorated it with a star: 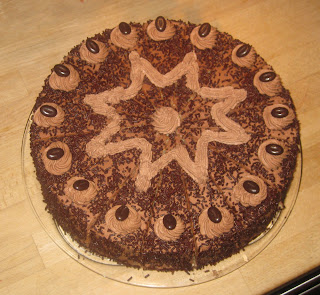 Well, I have been working on a (not exactly star-related but nevertheless somewhat creative) project which didn't turn out the way I wanted at all. Awfully frustrating. And so, while my creativity is hiding in some corner, sulking and licking her wounds, I have to take star matters into my own hands and resort to some very simple stars - like what can be made with the help of The Scribbler: 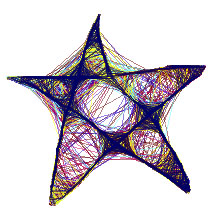 This day rushed by without me even noticing. So, when we returned home tonight after a fantastic circus show, I realised I still hadn't made a star and so my sister generously sat down with me and taught me how to make this origami star: